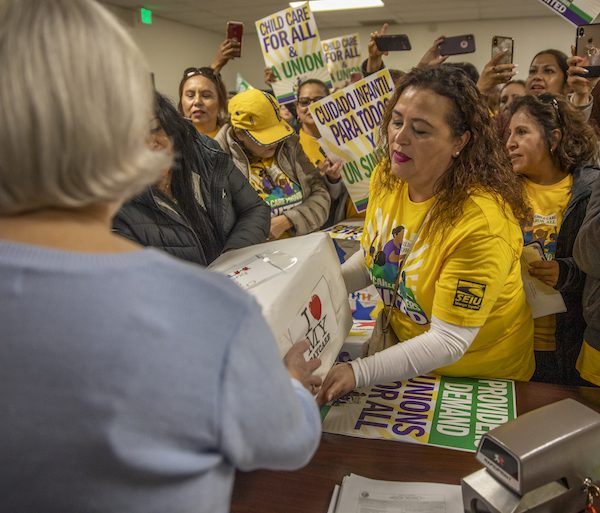 CCPU members march from the state Capitol to the PERB building to deliver 10,000 unions crds to call for elections in Sacramento, Calif., February 5, 2020.
Photo by Robert Durell

By an overwhelming margin, and after a 17-year campaign that started with lobbying and ended with successful organizing, AFSCME and the Service Employees scored a joint big win in California, winning recognition to represent at least 40,000 state-employed child care workers there.

Presumed Democratic presidential nominee Joe Biden immediately congratulated the workers on their victory and declared in a tweet that he wants that victory to be extended nationwide and that he would use his position in the White House to make it easier for childcare workers across the entire nation to unionize. The win in California is the largest number of workers to unionize in a single sweep at any time during the 21st century.

Now comes the next phase: Bargaining with their employer, the state of California, over wages, working conditions and other items on their members’ agenda. Prime among them: getting the state to increase its payments to child care users and centers, since that cash accounts for most of the providers’ income.