How Child Care Enriches Mothers, and Especially the Sons They Raise 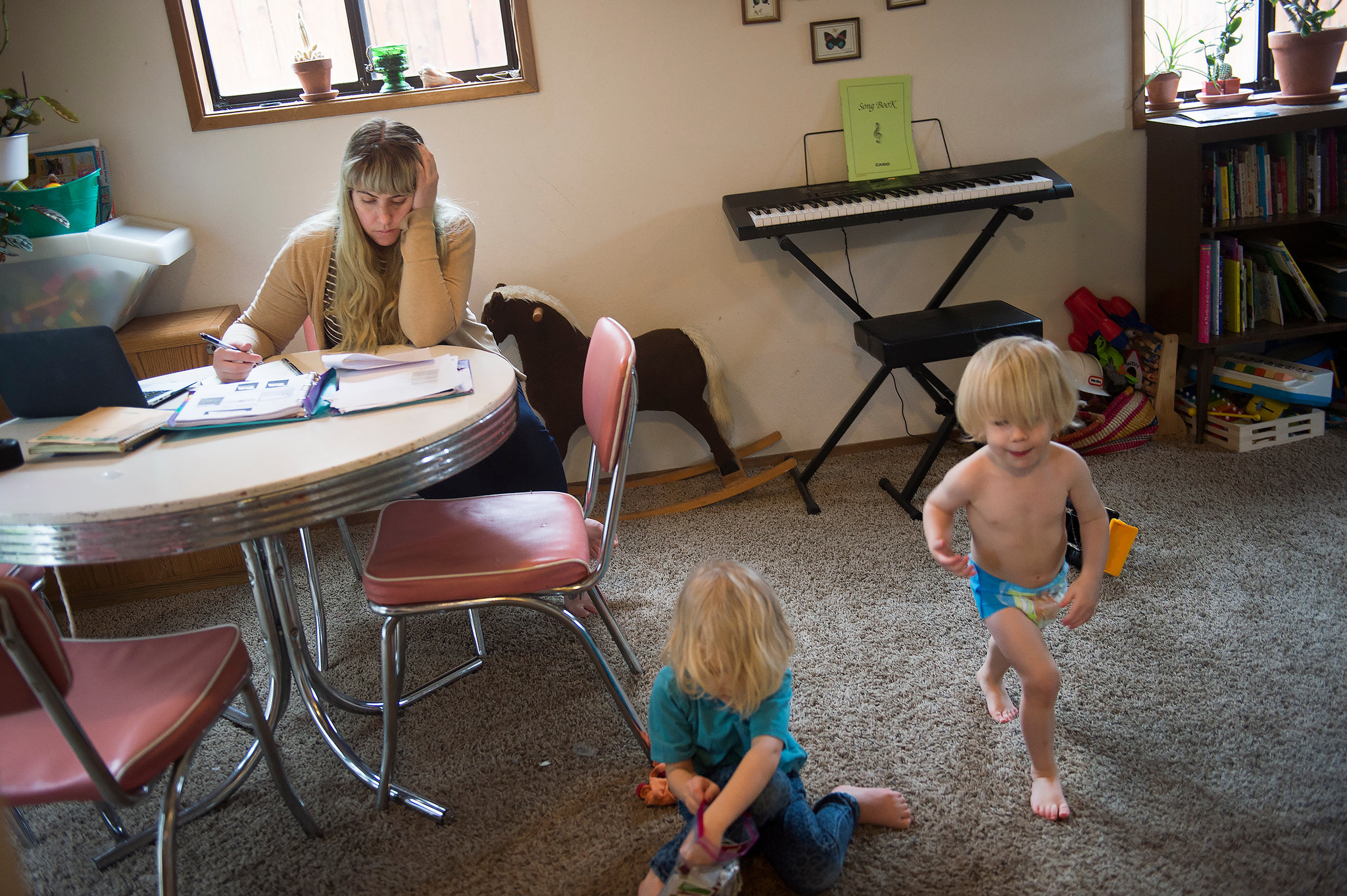 Jasmin Cross trying to study while her sons, Sebastian and Vyvyan, played in their home in Portland, Ore. She attends a community college and their father works full time, which she said they could not do without free child care through Head Start.

As many American parents know, hiring care for young children during the workday is punishingly expensive, costing the typical family about a third of its income.

Helping parents pay for that care would be expensive for society, too. Yet recent studies show that of any policy aimed to help struggling families, aid for high-quality care has the biggest economic payoff for parents and their children — and even their grandchildren. It has the biggest positive effect on women’s employment and pay. It’s especially helpful for low-income families, because it can propel generations of children toward increased earnings, better jobs, improved health, more education and decreased criminal activity as adults.

Affordable care for children under 5, long a goal of Democrats, is now being championed by Ivanka Trump.

The Department of Health and Human Services says child care should cost 7 percent of a family’s income at most — but 42 percent of families who buy care for young children spend considerably more than that, according to census data analyzed by Beth Mattingly at the University of New Hampshire. A report by New America and Care.com put the average cost of child care in the United States at $16,514 a year.

It’s children with parents who can least afford high-quality care who benefit most from it, research has found. That is because affluent children have better alternatives. For well-off children, some studies have linked day care, especially low-quality care early in life, to achievement and behavior problems.

A powerful new study — which demonstrated long-term results by following children from birth until age 35 — found that high-quality care during the earliest years can influence whether both mothers and children born into disadvantage lead more successful lives. The study was led by James J. Heckman, a Nobel laureate economist at the University of Chicago.

The study analyzed two well-known experimental programs in North Carolina, which offered free, full-time care to low-income children age 8 weeks to 5 years, most of whom were black and lived with a single mother. The children in the control group were at home or in lower-quality programs.

The mothers of those in the experimental program earned more when the children were in preschool, and the difference was still there two decades later.

When the boys reached age 30, they earned an average of $19,800 more a year than those in the control group and had half a year more education. (The small sample size — 37 boys in the programs who stayed in the study — means the difference was not very precisely estimated.) When the girls reached 30, they had two more years of education and earned about $2,500 more, the study found.

In their mid-30s, men who attended the program were 33 percent less likely to be drug users, had fewer misdemeanor arrests and were less likely to have high blood pressure.

The conclusion that boys benefited more than girls meshes with other research findings that boys are more sensitive to disadvantage and responsive to intervention.

The program was expensive — $18,514 per student a year — but after calculating effects like the cost to society of unemployment, crime and poor health, the researchers concluded that it returned $7.30 for every dollar spent. In addition to Mr. Heckman, the researchers were Jorge Luis García of the University of Chicago and Duncan Ermini Leaf and María José Prados of the University of Southern California.

High-quality preschool showed multigenerational benefits in another new study, which traced nearly one million children in Denmark until old age. Children who attended the high-quality programs had slightly more years of schooling and an increased likelihood of living beyond 65 — and their children also got more education.

Child care assistance was also shown to help working families in a study that compared various policies in 22 industrialized countries. More than parental leave or flexible schedules, it was government spending on early childhood care and education that had the single biggest effect on boosting women’s employment, earnings and fertility rate and on decreasing gender pay gaps. 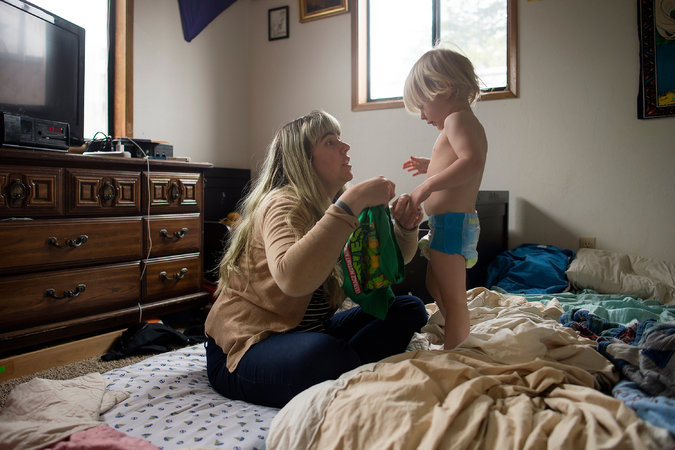 Jasmin Cross at home with her younger son, Vyvyan Lamberty-Smith, 2.

One reason: It helps women work, while other policies help them take breaks from work, according to the authors, Claudia Olivetti of Boston College and Barbara Petrongolo of Queen Mary University of London. “Making it easier to be a working mother mattered most,” Ms. Olivetti said. “There is a higher premium for careers from staying in the market.”

The study found the United States spends 0.4 percent of G.D.P. on child care, the lowest level among industrialized countries and half the average. Low-income parents piece together state and federal assistance, including tax credits, Head Start and block grants to states, which don’t reach everyone who needs help.

When Jasmin Cross had her first son, Sebastian, now 3, she enrolled in community college so she would “be able to get a good-paying job and be able to provide for my family.” She and her partner, who earns about $35,000 a year, couldn’t afford full-time child care. So she worked as a waitress on weekends and went to school part time, paying $600 a month for care two days a week. After the arrival of their second son, Vyvyan, now 2, they could not afford even part-time child care.

“Families are just not able to succeed the way that it’s set up,” said Ms. Cross, who is 35 and lives in Portland, Ore.

She found out about a Head Start school on the college’s campus, one of the few free early childhood programs for low-income families. Both boys now attend full time, and Ms. Cross, who is studying accounting, plans to earn her bachelor’s in three years.

While politicians across the board say they want to help working families, there are great differences over how. Liberals have proposed free public programs for children under 5 or capping child care expenses. Conservatives have suggested expanding the existing child care tax credit. Some policy makers say the best outcome would give more parents flexibility to stay home.

President Trump’s proposal, advanced by his daughter, would deduct the average cost of child care from parents’ income taxes and would include stay-at-home parents. The income limits would be $500,000 jointly or $250,000 individually. He also suggested child-care-spending rebates for families not qualifying for a deduction, and expanding pretax dependent care savings accounts.

Yet the aid he has proposed pales next to the actual cost of care. According to the Tax Policy Center, it would increase the after-tax income of families with children by an average of 0.2 percent, or $190. For families with incomes below $40,000, the annual savings would be $20 or less.