43,000 workers who care for the kids of state-subsidized poor families have gone union in the nation’s largest organizing victory in many years. 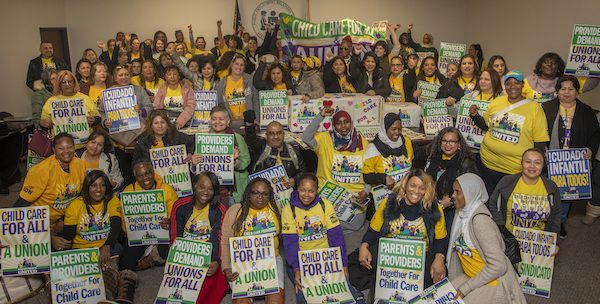 In the nation’s largest union organizing victory in many years, California’s Public Employment Relations Board announced Monday that the state’s home-based care workers for children from poor families that receive state child care subsidies had voted to form a union. California Child Care Providers United has 43,000 members, and of those who voted in the union recognition election, fully 97 percent cast their ballot for the CCPU.

The identity of these new members is every bit as notable as their quantity. All but a handful are women, and the vast majority are either African American or Latina. Also notable is the length of their battle for the right to organize, which began all the way back in 2003.

Like millions of workers in minority- and female-dominated occupations, family care workers, along with other domestic workers and agricultural laborers, were pointedly excluded from having collective-bargaining rights under the 1935 National Labor Relations Act. States, however, were left free to grant those rights to those workers, as California did for farmworkers during Jerry Brown’s first go-round as governor in the mid-1970s. When child care workers first began to organize 17 years ago, their hope was that their state—first in granting farmworkers that right—would also become the first in granting child care providers that right.

Continue reading at The American Prospect >>