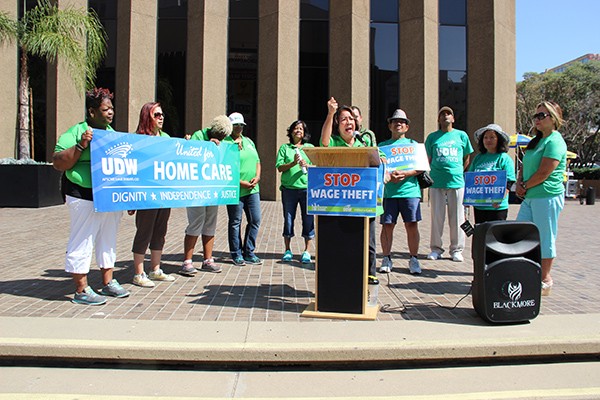 “Why should we be left out?”

That’s the question San Diego caregiver Nicanora Montenegro asked the crowd of IHSS providers who gathered at the office of the city treasurer on Thursday morning. Nicanora works as her 47-year-old sister’s caregiver, and she is one of the estimated 10,000 IHSS providers in the city of San Diego who were left out when the city raised its minimum wage from $10 to $10.50 an hour.

Wage theft, or denying a worker wages to which they are entitled, has been going on in San Diego since July when the city’s first minimum wage increase went into effect. This came after voters in the city, including many IHSS providers, elected to raise the city’s minimum wage by passing Proposition I in June. Although we were not left out of the proposition, San Diego caregivers were left out of the actual wage increase, because of an unfair decision by the state of California. Rather than enforcing the decision made by San Diego voters, the state decided to continue to pay providers just $10 an hour – $.50 less than the new minimum wage.

“Every other worker working in the city is being paid $10.50 per hour, it makes no sense that the state is refusing to pay us this wage too,” said Theresa Blackwell, an IHSS provider for an elderly woman in her community. “I’m here today fighting for a better way of living, so I won’t have to struggle and live paycheck to paycheck.”

Theresa was among the providers who rallied at the city treasurer’s office. After the rally, Theresa and four other members of the San Diego bargaining team went into the office to file official wage theft complaints with the city against the state. We urged the city to take action on our behalf, and demand the state enforce our local laws. 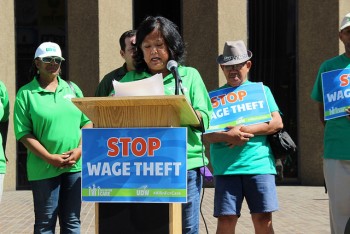 Darlene Nelson, a provider for her two adult daughters told the crowd, “We shouldn’t have to fight for minimum wage. It is a basic right, and to deny it to us is wage theft.”

“Why would people in Sacramento, who definitely make at least minimum wage, decide to pay us less when we need it just as much as every other San Diegan?” Darlene Nelson, a provider for her two adult daughters who live with developmental disabilities asked the crowd. “We shouldn’t have to fight for minimum wage. It is a basic right, and to deny it to us is wage theft.”

Although we gathered to protest and fight for our right to at least the minimum wage, IHSS providers and providers around the state know we need and deserve a lot more than minimum wage. Darlene urged us to be All in for Care, which means we will work hard at the bargaining table with the state in Orange, San Diego, and Riverside, and with counties around the state to win better wages and benefits, and a better quality of life for our families.

“We’re making $10 an hour right now and it’s not enough,” said IHSS provider and San Diego District Chair Brooks Ashby. “That’s why UDW is fighting for $13 to $15 an hour at the bargaining table… We need better pay to meet our needs and the needs of our clients.”

In San Diego, we will continue to fight back against the state’s claims that they don’t have to pay us fairly, but we won’t stop there. As Darlene said, “fellow caregivers, we shouldn’t be making minimum wage… but tomorrow and beyond, we will fight for far more together!”