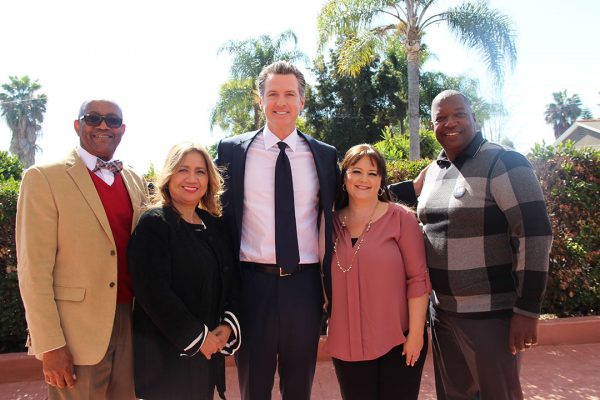 San Diego – United Domestic Workers of America (UDW/AFSCME Local 3930), one of the largest local unions in the state, announced today that California Lieutenant Governor Gavin Newsom has received the union’s endorsement for California Governor. UDW’s Executive Board, made up of In-Home Supportive Service (IHSS) providers throughout the state, met with the candidates in February and surveyed their positions on the issues that matter most to caregivers and the seniors and people with disabilities that they care for.

“California is facing a long-term care crisis. Seniors make up one-fifth of our state’s population, a number that is expected to balloon by 2030,” said UDW Executive Director Doug Moore. “Our state needs a plan – how are we going to care for those seniors? How are we going to recruit quality caregivers? We must start by electing someone we can trust to be a champion on long-term care—and that person is Gavin Newsom.”

“Our union will work tirelessly through November to help elect Gavin Newsom, because he understands the importance of IHSS, and investing in the future of long-term care by supporting caregivers and the work we do,” UDW President and home care provider Editha Adams said. “Newsom has a proven track record of standing with working families in our fight for economic and social justice.”

“Caregivers are the backbone of a healthy and thriving California, and they are leading the way to help solve our state’s long-term care crisis,” said Lieutenant Governor Newsom. “I am honored to have earned the endorsement of UDW’s 100,000 home care providers, and I look forward to working with them as they fight for equality, the IHSS program, and a long-term care system that is accessible to every Californian that needs it.”

United Domestic Workers of America (UDW/AFSCME Local 3930) is a home care union made up of over 100,000 in-home caregivers in 21 counties across the state of California. UDW caregivers provide critical services through the state’s In-Home Supportive Services program (IHSS), which allows over half a million California seniors and people with disabilities to remain in their homes with dignity and independence.