This notice is to inform you that the nominations for UDW Convention Delegates are now open. Delegates will be elected to represent UDW Districts at the UDW Convention. The top members in each district receiving the most votes will be declared winners of the election. Delegate winners must be able to attend the convention, which begins on June 7th and ends on June 10th. Those nominees who are on the ballot but not elected as delegates are elected as alternates, in order of the total of votes they received.

*You are not voting at this time, you are nominating member providers to be listed on the Official Ballot that will be sent out the week of February 12th, 2018. Ballots will be counted on Tuesday, March 20th, 2018.

Any member in good-standing as of November 2017 is eligible to run for delegate. Members must remain in good standing for the months preceding the convention to hold elected position.

Each UDW district is allotted delegates according to the number of dues-paying members in each district. See chart to find out how many delegates are allotted for your district: 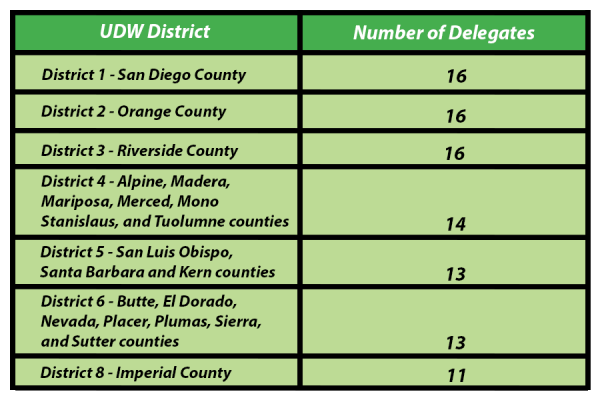 All nominations must be made in writing. Download the form here:

The following will be the required information on the nomination form:

CHALLENGES TO THE ELIGIBILITY OF NOMINEES

A list of candidates nominated will be posted on the unions website (www.udwa.org) on Tuesday, January 16th, 2018. Any member or nominee may challenge the eligibility of a nominee. Any challenges to the eligibility of a nominee should be submitted in writing to Election Committee C/O Clarissa Gonzalez, 4855 Seminole Ave, San Diego, CA 92115 or faxed to 916-244-2688 or emailed to [email protected]. Eligibility challenges must be received no later than 4:30 pm on January 26th, 2018. The decisions of the Election Committee concerning all eligibility challenges are final.

Nominees will be notified of any challenges as the Election Committee receives them. Nominees may reply to any protests by Wednesday, January 31st, 2018 in writing to Election Committee C/O Clarissa Gonzalez, 4855 Seminole Ave, San Diego, CA 92115 or faxed to 916-244-2688 or emailed to [email protected].

Ballots will be mailed as early as February 12th, 2018 but no later than February 16th, 2018 to all eligible members in good-standing. All members who signed a membership authorization card prior to January 31, 2018 and paid dues in the month of January 2018 will be eligible to vote in this election.

Each candidate is entitled to name one Official Observer who may be present at both the US Post Office location and as an observer at 4855 Seminole Ave., San Diego, CA 92115 for the tally. No candidates will be allowed at the tally and no candidate may serve as an observer.

Election results will be posted on the union’s website (www.udwa.org) after the completion of the tally.

Candidates elected as delegates will be contacted by a UDW staff immediately after the election for travel arrangements.

All costs to send the delegates to convention in San Diego, CA will be paid for by UDW including all flights, hotel accommodations and daily per diem to pay for meals. The expenses of guests who are non-delegates will not be paid by UDW, Local 3930.

Any member in good-standing may protest the conduct of the election for valid cause. All election protests should be filed with the Election Committee no later than 4:30 pm on March 31st, 2018, in writing to Election Committee C/O Clarissa Gonzalez, 4855 Seminole Ave, San Diego, CA 92115 or faxed to 916-244-2688 or emailed to [email protected].

The decision of the Election Committee concerning all eligibility challenges are final.