Over the last several months, UDW caregivers have campaigned against health care repeal attempts that would result in millions of Americans losing coverage and make deep cuts to Medicaid. We are relieved that the Senate’s attempt to repeal the Affordable Care Act has failed, and we thank Senators Dianne Feinstein and Kamala Harris for doing the right thing for Californians.

“UDW is committed to the simple idea that we are stronger when we take care of each other,” said UDW Executive Director Doug Moore. “And though we may breathe a sigh of relief today, we know another round of attacks will surely come. We pledge to remain vigilant in our defense of these vital programs.”

UDW caregivers will continue to contact the 14 California lawmakers in the House of Representatives who voted in favor of the repeal and cutting care for their constituents, including cutting hundreds of millions of dollars to the state’s In-Home Supportive Services program (IHSS).

“Our lawmakers need to drop efforts to repeal our care once and for all. Instead they should focus on making sure people have the health care and long-term care they need,” said Moore. “Health care is a right for everyone, at every point in our lives.” 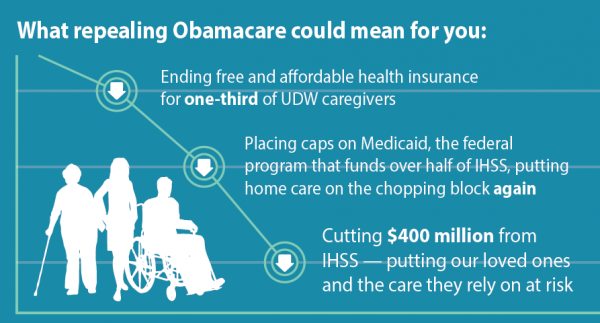 Federal changes could mean cuts to home care and our benefits

After months of fighting to protect IHSS from cuts, UDW caregivers celebrated in March when the Republican led Congress was unable to pass a health care repeal bill that would have made drastic cuts to the federal Medicaid program and IHSS.

To stop this effort, UDW caregivers made over 3,000 calls to Congress and attended town hall meetings across
the state. The failure of the health care repeal bill was a major victory, but we know Congress will try again — putting IHSS in serious danger. In addition, the Trump Administration could make changes to a federal rule that allows IHSS providers to earn overtime pay.

All of these threats are why it is important that IHSS providers continue to stand together as a union. We won’t give up on our loved ones and clients without a fight!

For more information about the challenges facing IHSS, go to our website: www.udwa.org.