Health care repeal would cut California’s home care program by over $400 million
New website—www.cutshurtCA.com—shares the stories of some of the 500,000 seniors and people with disabilities at risk

Repealing Obamacare will not only cut care for millions of Americans, but lead to devastating cuts to California’s Medicaid-funded home care program IHSS – a program utilized by half a million vulnerable and low-income seniors and people with disabilities in our state. Through the quiet elimination of the Community First Choice Option, the House version (called the AHCA) would immediately slash $400 million from IHSS and put the care of those who rely on it in jeopardy.

Senate Republican leaders released their draft of the bill today, and it features even harsher cuts to Medicaid than the House version. Republican leaders in the Senate plan to rush a vote by next week—these drastic, inhumane cuts could hit IHSS and Medicaid before the public knows what happened.

For the nearly 100,000 IHSS workers in California represented by United Domestic Workers of America (UDW/AFSCME 3930), cutting IHSS is unthinkable – so we’ve launched a new website to bring our stories forward and stop this cruel and destructive bill from becoming law. The interactive website allows users to see which California lawmakers voted for AHCA, meet the constituents who will be impacted by their vote, and easily send letters to their representatives in Congress.

“Cuts to Medicaid and IHSS would be devastating for Barbara,” says Turlock, CA care provider Lidia Rodriguez of her IHSS client who lives with MS, and whose story is featured on the site. “She told me that she would rather die than go to an institution and receive substandard care there. She is happier and healthier at home.”

In-home caregivers provide vital, cost-effective care that allows the state’s most vulnerable residents to live in their own homes with comfort and respect. Cutting or eliminating this program would lead to horrific consequences for California families, with thousands suddenly faced with insurmountable care costs, displacement and/or homelessness and, potentially, needless deaths.

Repealing health care for millions and cutting Medicaid would have a devastating impact on vulnerable Californians who rely on in-home care to survive and live with dignity. UDW members are united in fighting for the IHSS program and the clients they serve.

To read more stories of caregivers like Lidia Rodriguez or to learn about the health care repeal’s threat to California’s seniors and people with disabilities, visit www.cutshurtCA.com.

United Domestic Workers of America (UDW)/AFSCME Local 3930 is a home care union made up of nearly 100,000 in-home caregivers across the state of California. UDW caregivers provide care through the state’s In-Home Supportive Services program (IHSS), which allows over half a million California seniors and people with disabilities to stay safe and healthy at home

Every year, UDW scores the California legislature and the governor on their support of policies that impact homecare recipients and care providers. This year, we’ve added the overall career scores of our elected leaders to acknowledge those who have consistently supported providers and our IHSS clients. Find out how the governor and your lawmakers scored by clicking on the booklet below. 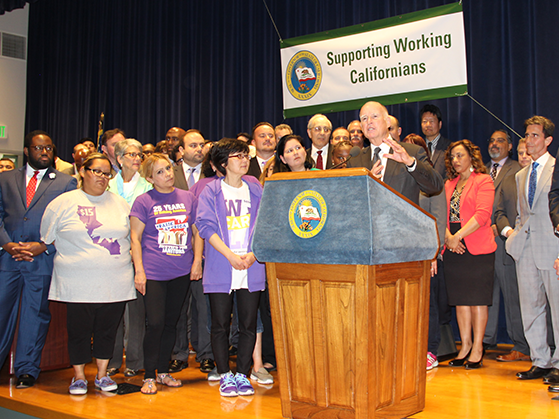