My husband Leon is 69 years old and lives with COPD and cirrhosis of the liver. My full-time job since 2000 has been providing him with in-home care, so he can remain in our home where he is happiest and healthiest. I’ve been a home care provider for 16 years, and for 16 years I’ve worried about what would happen if an unexpected tragedy struck my family. One of my biggest fears is my husband passing away. I would be grief stricken, and because I don’t qualify for unemployment, I would also have no financial safety net while I searched for another job.

As I approach my 60s, I’m not able to prepare to retire in the next few years like most people. Instead, I’m constantly worried. I’m worried about how we’re going to live if I’m ever unable to care for Leon. Without the safety net of Social Security, I would no longer be able to contribute to our household expenses. Spouse and parent providers aren’t asking for extra. We just want our work to be treated fairly and with the same dignity and respect other workers receive.

Bernadette Evans is an IHSS provider for her husband Leon in Riverside County. Read more about our fight to win Social Security and Medicare for spouse and parent providers here. 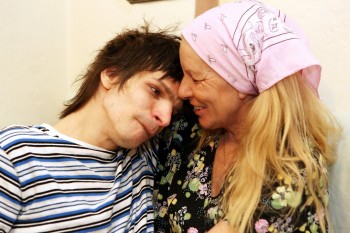 My 39-year-old son Jacob was born with a brainstem defect. He relies on me 24/7 to provide for all of his needs, including bathing, preparing his meals, paramedical care, and exercise. My home care wages are the primary source of income in our home when my husband has trouble getting landscaping work. I’m grateful for the opportunity to work as Jacob’s home care provider, but I’m frustrated that my work is not taken seriously.

Exclusion from Social Security and Medicare is going to hurt my family. At some point, I may not be able to care for Jacob any longer, and I will need to retire. It makes me angry to know that even if I retire from home care, I will likely never be able to stop working. Both my husband and I will have to keep working somehow until our bodies fall apart. We’re in our 60s, and worrying about our financial future has caused me many sleepless nights. All workers, including parent and spouse home care providers, deserve access to Social Security, Medicare, unemployment, and paid family leave benefits.

Roxanne Bender is an IHSS provider for her son Jacob in El Dorado County. Read more about our fight to win Social Security and Medicare for spouse and parent providers here.