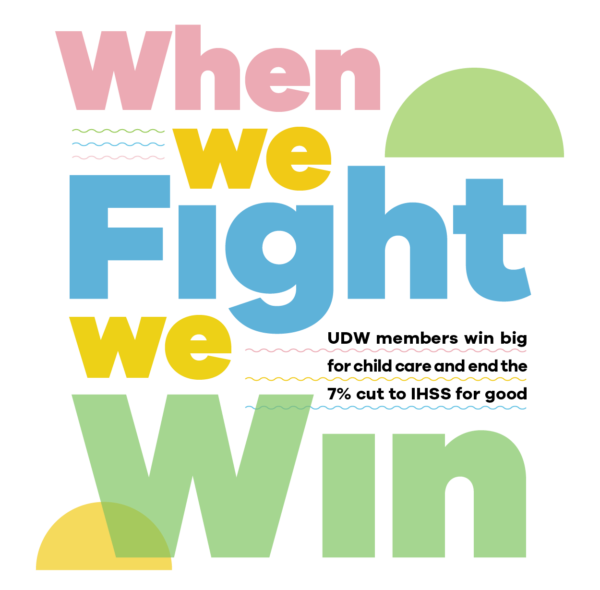 When We Fight, We Win

If you’re an IHSS provider who has been around awhile, you probably remember what it was like when the 7% cut was in place: not only did our IHSS clients lose much-needed hours of care, but IHSS providers suffered a 7% cut to our wages.

“We are not just numbers you can slash—we are real people,” UDW member Vibiana Saavedra told Sacramento lawmakers back in 2014 when we first fought to end the cut. While we have successfully stopped the state from implementing the cut every year since then, it has remained a threat looming over us… until now.

For the past several months, UDW members have made calls, rallied, lobbied our lawmakers, and made our voices heard. We told Governor Newsom he needed to permanently restore funding to IHSS and wipe the cut off the books, and he did!

“Governor Newsom has recognized what those before him did not,” said UDW Vice President Astrid Zuniga. “Seniors and people with disabilities should not shoulder the burden of balancing the state budget.”

For many of us, restoring funding to IHSS and ending this cut means finally having peace of mind after nearly a decade of waiting.

But that’s not all! We were also successful in our efforts to stop an increase to the counties’ share of cost of the IHSS program, which would have made bargaining for raises almost impossible. And counties that refuse to bargain with us in good faith will now see a 7% fiscal penalty when they fail to reach a contract agreement with IHSS providers.

“We haven’t had a new contract since 2017, and the current offer on the table is $0.00,” said Reyna Jacobo, a UDW member in Kern County. “This new penalty will hopefully go a long way in helping us win the raises and benefits that IHSS providers deserve.”

After many grueling months of negotiations, UDW’s child care members made history this summer when we reached our first ever contract with the state.

It took thousands of phone calls to legislators and the Governor, car caravans and protests outside of state offices, and day-long trips to the state Capitol to fight for this historic agreement, which includes significant rate increases and expands access to child care for working parents.

For many of us, this is a victory over 20 years in the making.

“I couldn’t be more proud to be a second generation child care provider and to win this long fight for better rates and dignity,” said UDW-CCPU member Miren Algorri. “My mother helped me see that by joining our voices together collectively, we could create a brighter future for both California’s child care providers and young learners.”

Here’s what we won:

We need a governor who will stand with us

On September 14, residents of California will be voting on whether or not to recall Governor Gavin Newsom from office. You’ve probably heard arguments from both sides, but I want to stick to the facts: we need a governor who will work with us to protect the IHSS program and fix the broken child care system.

In our last recall in 2003, Californians voted to replace Gray Davis with Arnold Schwarzenegger. Once he took office, Governor Schwarzenegger attempted to eliminate the IHSS program altogether, which would have left hundreds of thousands of seniors and people with disabilities—our clients and loved ones—without care.

That’s why it’s so vitally important that our elected leaders know us and value the work we do. Since taking office, Governor Newsom has shown us time and again that he supports caregivers and child care providers. He showed us when he dubbed us essential workers during the pandemic, and when he worked with us to ensure that we had the PPE and sanitation supplies we needed to keep the people in our care safe.

We know that Governor Newsom will continue to invest in our members, our families, and the people we care for. Let’s vote no on the recall to keep him in office. 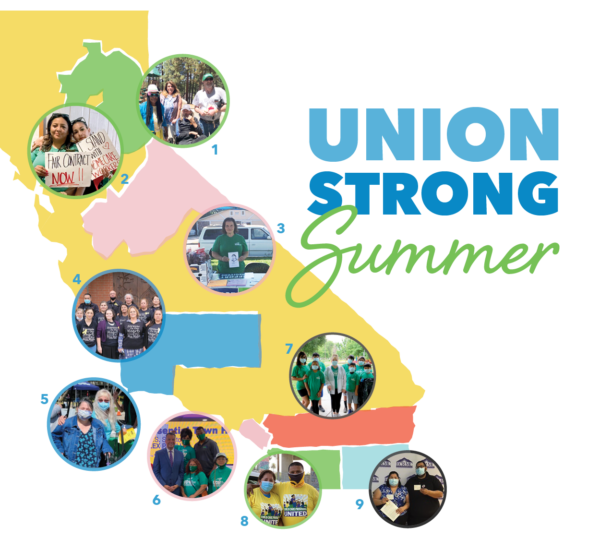 1. In Nevada county, caregivers and clients gather at a UDW PPE distribution. 2. UDW caregiver Gloria Helmcke and staff member Rose Perez stand together at the Butte Board of Supervisors to fight for better IHSS wages and benefits. 3. IHSS provider and District 4 Chair Florence “Corie” Crowson represented UDW at Merced County’s Juneteenth celebration. 4. We came together in Santa Maria to honor the life of our union sister and District 5 Vice President Elva Munoz. She will be sorely missed. 5. UDW caregivers and their clients protect themselves against COVID-19 at UDW’s vaccine clinic in Santa Maria. 6. In Orange County, IHSS providers joined with Senator Alex Padilla at a town hall on long-term care. 7. Members of Riverside’s Health & Welfare Council gave back and cleaned up Fairmont Park. 8. San Diego child care provider Francis Rodriguez and her husband Agustin celebrated May Day at Chicano Park in San Diego. 9. IHSS caregiver Eliud Robles gets the COVID-19 shot at UDW’s Imperial County vaccine clinic with his wife and client, Sara.