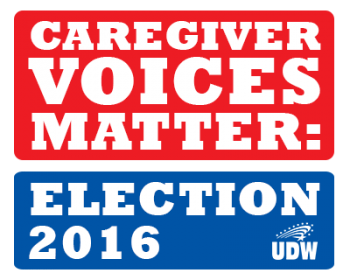 Home care workers can effect real change by making sure we elect leaders who will fight for us and our clients. In 2016, we get to do just that. Our vote is our voice and our power, so we carefully vet candidates in both local and statewide races. Recommendations are made to each local UDW board and our executive board, so that UDW members have a direct say in which candidates will best represent the needs of home care workers, our clients, and our communities.

Are you registered to vote? Register online by October 24, 2016 so that you can vote in the general election on November 8th!

UDW only endorses candidates that complete our endorsement process, which is open to all candidates regardless of political party.

For a local or statewide race not listed above, you can find union-endorsed candidates on the California Labor Federation’s website here.

The following candidates have been endorsed by the UDW Executive Board:

The following candidates have been endorsed by the UDW District Executive Boards:

The following propositions and measures have been endorsed by the UDW District Executive Boards: