Our bill to protect people with cognitive and developmental disabilities is now the law! 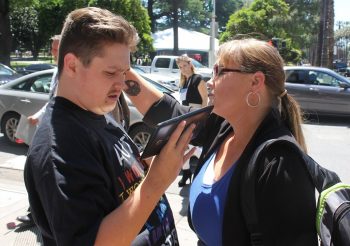 For those of us that care for a client with cognitive or developmental disabilities, interactions with law enforcement can be fraught with worry. Will the police misunderstand unexpected behaviors as threatening and respond with force? Will they understand a person with dementia is easily lost and frightened? We all want to be able to trust authorities when we call 911, but there are so many police encounters with people like our clients that can go terribly wrong.

That’s why UDW sponsored AB 911, a bill that puts the wheels in motion for the state to study the feasibility and cost of updating our state 911 system to allow people to voluntarily provide important information about themselves or a family member, such as calming techniques or behaviors they exhibit when agitated. The information would be attached to a phone number—the home phone or a parent’s cell phone—and would be sent to the first responder when a 911 call came from that number. With this information in hand, first responders will arrive on the scene prepared to identify and understand behaviors that may seem unusual to them so that they can focus on the person in need.

Once our bill moved to the governor’s desk, UDW members like Gretchen Gunzel of Irvine, CA took to the phones to convince Governor Newsom to sign it into law.

Gretchen cares for two sons with autism and ADHD and has been trying to find answers for this very situation. “I have been going to our local city police department for the last couple of years, asking them what I can do to help them know more about my two boys in the event there is an emergency and I am not there to help protect and interact with first responders,” she said.“Their continued response is ‘Don’t worry…our officers are trained and your boys will be ok!’ So frustrating!”

Called “The Manny Alert Act”, AB 911 is named in honor of UDW Executive Vice President Astrid Zuniga’s son, Manuel. Manny is 20 years-old, autistic and non-verbal. Astrid has made protecting the safety of Manny and others like him her life’s work. AB 911 is a law because of the countless hours Astrid spent walking the halls of the capitol, telling Manny’s story, and encouraging other members to join her.

“AB 911 brings us another step closer to saving the lives of people with cognitive and developmental disabilities,” Astrid said. “I’m proud of my union for sponsoring the Manny Alert Act and helping me work for its passage. And I’m proud of Manny. His spirit and resilience inspires me and everyone who meets him to work for a better world where we all are safe and treasured as we are.”