On March 28, 2016, UDW Executive Director Doug Moore stood
alongside Governor Jerry Brown as he announced his plan to
raise minimum wage to $15 per hour by 2022.

For the past year UDW caregivers have rallied and marched alongside thousands of underpaid workers to make one thing clear: no one should have to survive on less than $15 per hour in California.

And we won! On April 4, 2016 we were there when Governor Jerry Brown signed a historic $15 minimum wage into law.

The law also guarantees paid sick leave for IHSS workers for the first time ever: the first in 2018, the second in 2020, and the third and final day in 2022. It will also increase California’s current
minimum wage by one dollar over the next two years, and then by a dollar for each year thereafter until reaching $15 per hour in 2022.

This victory will have a huge impact on the more than 400,000 IHSS providers statewide who currently earn, on average, just $10.72 an hour – and many will start to see an increase in wages as early as 2017, when the minimum wage goes up to $10.50. 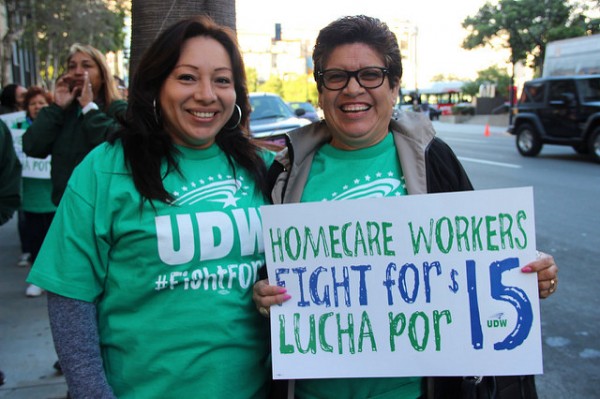 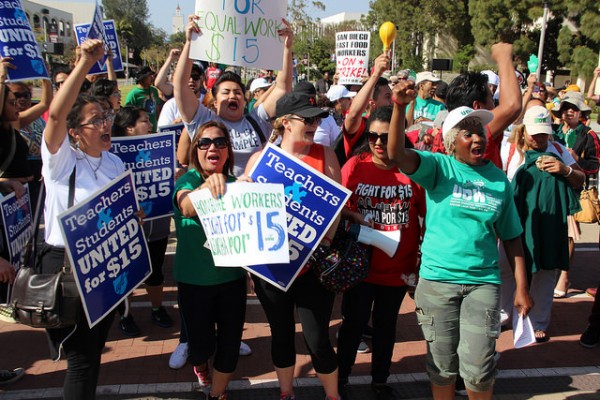 “No Californian who works full-time should be living in poverty. And yet, low-wage workers across the state are struggling to make ends meet. Caregivers for the state’s In-Home Supportive Services program (IHSS) make on average just $10.71 an hour. They work long hours to ensure that seniors and Californians with disabilities get the quality care they need, but at the end of the day many are unable to pay all of their bills and put food on the table for their families—and without paid sick leave, they are often forced to go to work sick, putting their clients and loved ones at risk.

That’s why UDW home care providers have been on the front lines in the Fight for $15 alongside fast food workers, child care providers, janitors, educators, and other underpaid workers.

We urge lawmakers to swiftly pass legislation that will uplift millions of hardworking Californians and their families. Raising the minimum wage to $15 an hour and giving all workers paid sick days is not just a matter of policy—it’s about doing what’s right.”

United Domestic Workers of America (UDW)/AFSCME Local 3930 is a homecare union made up of over 92,000 in-home caregivers across the state of California. UDW caregivers provide care through the state’s In-Home Supportive Services program (IHSS), which allows hundreds of thousands of seniors and people with disabilities to stay safe and healthy at home.