Throughout the state many IHSS caregivers are earning minimum wage, while some of us make over $13/hour. That’s why in 2017 we’re fighting to win state-level collective bargaining for all IHSS providers in California. Help us win #Dignity4All – call 1-855-912-7804 today and urge your state lawmaker to support our proposal to move IHSS collective bargaining to the state-level.

State audit of IHSS payroll system is out
…and it confirms what we already knew: the California Department of Social Services (CDSS) could be doing a lot more to help providers avoid paycheck delays. Next steps? Our union UDW is sponsoring AB 237, a bill that would make key recommendations from the audit report law – like changing the timesheet rules so that a provider’s work week matches their pay period. Read more here.

UDW mom champions legislation to keep her son and other IHSS clients safe
She’s not just UDW’s statewide Vice President – Astrid Zuniga of Stanislaus County is a grandmother, mother, and home care provider for her adult son Manuel, who lives with autism. This year we’re standing with Astrid to pass legislation that would keep IHSS clients like Manuel safe in interactions with the police. Read more here, and take this survey to get involved.

OC Register: “The Freedom Foundation wants to fight Democrats by busting a California home care union”
Earlier this month UDW caregivers Toni Monique Taloa, Silvia Briseño, and Roy Pridemore were featured in an article by the OC Register about anti-home care group the Freedom Foundation and the importance of our union. “I had never changed an adult diaper or given an insulin shot. I was exhausted. I was isolated,” says Toni Monique in the article. But UDW helped her win protective supervision for her sister, “so I could sleep more than two hours a night and hire another part-time provider to help out. The union gave me back my life.” Read more here.

On Saturday, January 21st, millions of women, men, and children in hundreds of cities around the world stood together in unity as part of the Women’s March on Washington. In California, it is estimated that 880,000 or 1 in every 45 residents attended a local march in dozens of cities across the state.

For UDW members, the reasons to march were as diverse as the nearly 98,000 IHSS providers our union represents, but a sense of urgency and a passion to fight for our rights united us all. We were among the huge crowds of people standing up for the environment, equal rights for women and people of color, immigrant rights, the rights of people with disabilities, and LGBTQ rights, home care, and our health care – rights that millions feel are under attack.

“I marched because women should be able to make decisions about our bodies,” said UDW member Luz Cedeno from Orange County. “And I marched because taking away the Affordable Care Act without a plan, and potentially cutting Medicaid would be harmful.”

The day before the march, an executive order was signed to push federal agencies to weaken the Affordable Care Act (ACA) also known as Obamacare. Changes to the ACA that don’t include a plan to improve and replace it could be particularly detrimental to UDW caregivers and our families, because an estimated 75,000 of us are now eligible for free or lower cost health insurance because of it.

“I marched because everything that many before us fought and even died for is at risk of being undone,” said UDW Vice President Astrid Zuniga who spoke at the Women’s March in Modesto.

As a union, we have been fighters for many social justice causes. We do this work because none of us are only caregivers. We are women, men, young people, older adults, immigrants, members of the LGBTQ community, people of color, people with disabilities, Republicans, Democrats, Independents, low-wage workers, the middle class, formerly incarcerated people, and so much more. We don’t let these differences divide us, instead we meet at the intersection of all of these identities and fight together for justice for us all.

“It was so amazing and liberating to stand up for the rights of our clients and for home care,” said Kym Icke, a UDW member from San Diego County. “By marching, we told our elected leaders that we are here and we are important.”

“I marched to ensure our rights aren’t violated,” echoed UDW member Camilla Bradford from Riverside County. “Our health. Our choice. Our bodies. LGBT rights. Everything. We must unite, stand together, and fight. We can’t put women back 300 years.”

Desmond Prescott, also from Riverside County, was one of the many men who marched. “I marched to support my fellow caregivers, and celebrate the contribution these women make to our society.”

No matter your reason for marching or not marching, it was a historic day that our country and the world will remember for decades to come. “I took my granddaughter with me,” said Cassandra Sambrano, a UDW member who attended the march in Riverside. “She’s eight years old, and I took her because I wanted her to be part of history.”

We want this beautiful moment of solidarity to spark a movement that is not fleeting, but instead creates a ripple effect that continues to move people to action on issues facing our families and communities. Many UDW caregivers have been social justice activists for years, but some of us are new and need help figuring out what to do next. Some suggestions include: 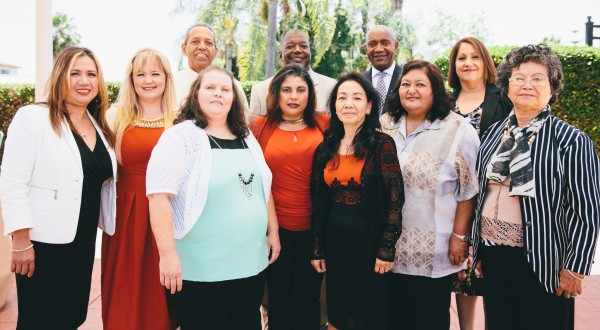 This year, we elected our new UDW Executive Board and District Advisory Boards. I am proud to introduce the leaders who will work with all of us to protect IHSS and help strengthen UDW for the next three years. You can read more about our work in the latest President’s report here.

Statewide President – Editha Adams
Editha has been an IHSS provider since 2003. She cares for her youngest daughter Ellis who lives with chronic lung disease.

Executive Vice President – Astrid Zuniga
Astrid works as the IHSS provider for her son Manuel who lives with severe autism.

Secretary Treasurer – Lientuong “Rose” Nguyen
Rose has been an IHSS provider for 18 years, and cares for her sister.

District 1 Vice President – Gerald “Brooks” Ashby
Brooks has been an IHSS provider for 14 years and takes care of his mother Daisy who lives with osteoporosis, Crohn’s disease, and high blood pressure.

District 2 Vice President – Christine Nguyen
Christine provides care for her 98-year-old mother, and has been an active member of UDW since 2005.

District 3 Vice President – Rosa Beltran
Rosa works as the IHSS provider for her mom who lives with dementia and her father who has diabetes and limited mobility.

District 6 President – William Reed
William has been an IHSS provider for 20 years, caring for his son William who lives with autism.

District 8 Vice President – Maria Isabel Serrano
Maria has been an IHSS provider since 2006. She currently provides care for a young woman with Down syndrome.