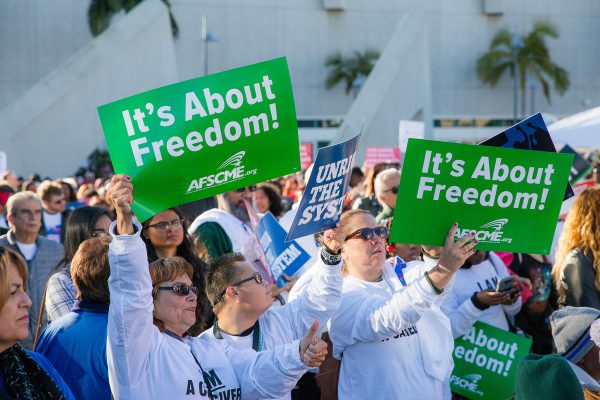 With its decision in Janus vs. AFSCME, the Supreme Court has created a serious challenge to working people and shown itself to be now firmly in the hands of wealthy corporations. As low-income workers who depend on the ability to join together in a union, we recognize any attempts to eliminate unions is an attempt to eliminate our power to protect ourselves and the clients we care for—and we will not take it laying down.

As you may have read earlier, the Janus case is funded and supported by anti-worker groups like the Freedom Foundation and billionaires like the Koch brothers who want to get rid of unions so employers can pay workers as much—or as little—as they want. The Janus decision helps them by banning fair share fees and making it harder to fight for better wages and fight back against attacks on our rights.

Though UDW is an AFSCME local, we are not as directly impacted by the Janusruling as other unions. A 2014 U.S. Supreme Court decision, Harris v. Quinn, paved the way for Janus by ruling against agency fees for home care workers. But even though the decision doesn’t affect how we collect dues, now that the anti-union groups have won on Janus you can be sure they will step up their attacks on home care—putting IHSS and the rights we have fought for in danger.

Make no mistake, however: Although those who funded the Janus case are trying to destroy organized labor and our goals of social and economic justice for all, we are not going anywhere.

When Harris made it harder for us to organize in 2014, UDW members fought back. We worked hard to grow our membership and focus on what is important to us: protecting IHSS and the low-income seniors and people with disabilities we care for. We also found new ways to help each other with expanded advocacy programs and tools like the IHSS Help mobile app and the UDW U.S. Bank Focus Card. Our success after Harris shows us—and other unions—how to succeed after Janus by building member power and standing up for the rights of all working people to better our own lives.

Though we strongly reject the Court’s decision, we are proof that Janus won’t stop the labor movement. By doubling down on organizing and serving our members, we not only survived, but built a bigger, more powerful, more engaged membership. We will not only survive, we will thrive. And we will help all working families as we help ourselves.

“With its decision in Janus vs. AFSCME, the Supreme Court has created a serious challenge to working people and shown itself to be now firmly in the hands of wealthy corporations,” said UDW Executive Director Doug Moore. “By ruling against the ability of public sector unions to build and support their memberships, the Court has essentially told American workers they are on their own against a rigged system.”

Today’s decision overturns 1977’s Abood v. Detroit Board of Education, which affirmed the right of public sector unions to collect “fair share” or “agency” fees from the workers they represent—a right made obvious by the demonstrably higher wages and benefits enjoyed by all workers in a unionized workplace.

UDW caregivers strive to make a difference, not only by bargaining for better wages, benefits and working conditions for themselves, but by engaging on the larger issues of social and economic justice that intersect with workers’ rights. UDW members recognize that they will build better futures for themselves and those they care for by building stronger communities and eradicating inequalities for everyone. As leaders in the field of long-term care, disability rights, income equality, immigration reform, and racial, gender and LGBTQI justice, UDW caregivers are alarmed that the Court would come down so heavily on the side of inequality and injustice.

Though UDW is an AFSCME local, its operations are not directly impacted by the Janus ruling. A 2014 U.S. Supreme Court decision, Harris v. Quinn, paved the way for Janus by ruling against agency fees for home care workers. Since then, UDW has expanded the definition and value of union membership with greater advocacy, financial tools to help members in their daily lives, and increased opportunities to become leaders in their communities. UDW has not only maintained their membership in the face of Harris v. Quinn, but today has more members than ever before.

And though UDW is an example of how to succeed in a “right-to-work” environment, Moore said, the reason for UDW members’ opposition to the Janus decision is clear.

“Because our members are low-income workers who depend on the ability to join together in a union, we recognize any attempt to eliminate unions as an attempt to eliminate our power to protect ourselves and the clients we care for—and we will not take it laying down,” Moore said.”

United Domestic Workers of America (UDW/AFSCME Local 3930) is a home care union made up of over 108,000 in-home caregivers in 21 counties across the state of California. UDW caregivers provide critical services through the state’s In-Home Supportive Services program (IHSS), which allows over half a million California seniors and people with disabilities to remain in their homes with dignity and independence.