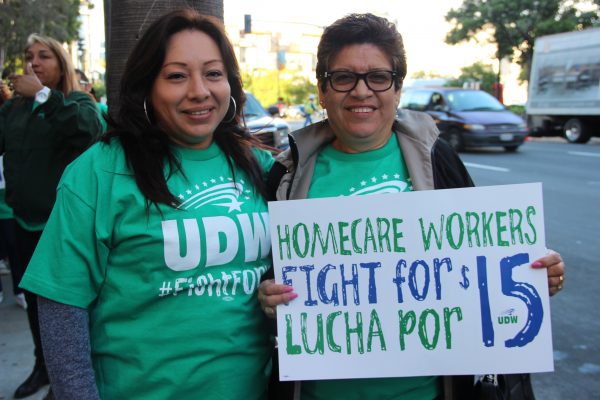 The minimum wage increase is no coincidence. UDW caregivers worked with other low wage workers to convince elected leaders to raise the wage, and lift California families out of poverty. And we won!

The minimum wage is scheduled to reach $15 by 2022, and in addition, the plan includes paid sick days for IHSS providers for the first time in history starting in 2018.

We will continue to celebrate this victory for working families, but we will not be complacent. UDW caregivers must continue to fight for more than minimum wage, because in-home care should not be a minimum wage job. The work we do is worth far more. That’s why UDW caregivers went All In for Care in 2016. We recommitted ourselves to the fight for wage and benefit improvements in UDW counties throughout the state, which you can read about here.

Click here to contact your local UDW office and find out how you too can go All In for Care.

Remember, no one IHSS provider can do it alone! Click here to join our work to increase IHSS provider pay in your county by becoming a member of UDW today.